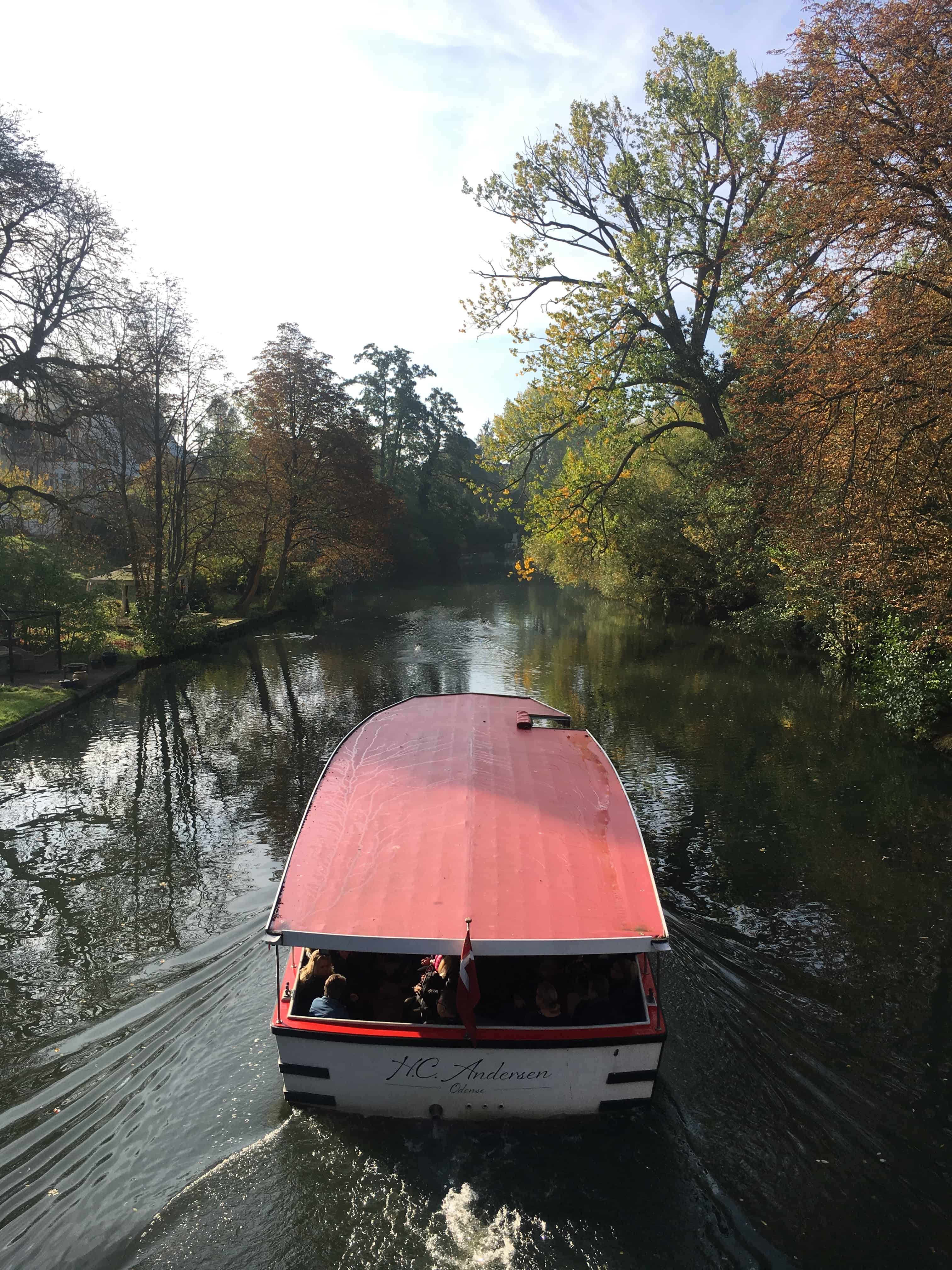 From White Gloves and Tall Hats to a Common Property

The Establishment of Odense Aafart

Odense Aafart was established in 1882 but in order to understand why we sail along the river, we have to go back a few decades in history. In 1828, it became popular among the more classy part of society to go on picnics or to balls in the forest in Fruens Bøge. However, it was only the upper class who were allowed to participate to these events. Women in service, coachmen, waiters, and glassblowers had to stay at home.

At this time, the easiest way to travel from Munke Mose to Fruens Bøge was by sailing. Therefore, Odense Aafart was established in 1882 to meet this demand. It was soon to be noticed that rowing along the river was physically exhausting which is why the first steamboat “Kvik” was introduced in 1883. “Kvik” was followed by “Pilen” in 1996 along with “Odin”, “Skt. Alban”, and, lastly, “Benedict” in 1890.

One of the most famous things associated with Odense Å is probably the song “Sejle op ad åen” that has become huge a part of the Danish heritage. This song was first performed in 1895 as part of the Sommerrevy at Folketeatret. This theatre is located only a few meters from Aafarten’s kiosk and Odense Å. The original song is about the tour with the steamboats: up the river to the balls in the forest of Fruens Bøge and back again down the river to Munke Mose. The song has had several different versions of lyrics. The lyrics we sings at gatherings today is a shorted version of the song.

This Was a Good Year.

Sailing along the river was not just for the fun of it. In 1900, the boats of Odense Aafart functioned as a mail delivery service for those companies and private residents along the river. Today, Odense Aafart are still allowed to sail with swallow-tailed flags because of this story. Odense Aafart even had their own stamps for the packages that was delivered on the river.

Life has not always been easy for Aafarten. In 1898, Denmark’s first bicycle path was established in Odense. This path went from Sdr. Boulevard all the way to Fruens Bøge which resulted in free transportation to Fruens Bøge. However, it was the tram that Odense Aafart had to cope with. In 1911, the new trams were being used and this was a faster and more practical way for the citizens of Odense to transport themselves around the city.

The upcoming world war also resulted in a lack of coal used by the steamboats. The ball in Fruens Bøge had become less and less popular and eventually stopped occurring. In these years, there was a huge lack in interest and resources.

However, nobody ever gave fully up on Aafarten. In the inter-war period, especially during the 1930s, Odense Kommune made many attempts to revive the people’s interest in sailing up and down the river. For example, they established new restaurants in Fruens Bøge where some of them, such as Restaurant Skoven and Carlslund, were popular for quite a long time. Among these restaurants, Carlslund is the only one still existing at its original location. The revival was a success and Odense Aafart began to sail again, although, with fewer passengers than before.

Thorvald Stauning Signs the Rules for Sailing on the River

In 1932 the speed was slowed down. A new law, signed by the Danish Prime Minister, Thorvald Stauning, made it illegal to sail with a speed above 5 nautical miles (9 km/t) at Odense Å. A violation of these restrictions would lead to a penalty of 5 kr. (Today, 197 kr.)

World War II became an even tougher period for Aafarten. Just like during World War I, there was a great lack in resources and there was not as many people in a festive mood. In this period, Odense Aafart had to temporarily shut down the sailings on the river.

The 1950s and the 1960s was a quiet time at Aafarten. It had become a tradition for children From Jutland and Funen to sail from Munke Mose to Odense Zoo in the end of the school year. A lot of children were being transported in this period.

However, the river experienced a lot of pollution. Especially during the 1960s, a lot of money were spent on cleaning the river. For example, a new sludge sewer was planted along the river from Dalum to Ejby Mølle.

Odense Aafart has had a few different owners. One of them is Knud Laursen who, in 1973, told Odense Kommune that he was interested in buying Aafarten from the previous owner. Knud Laursen had run a hot dog stand for a few years and had observed the sailing, and he thought that he could manage both. When Knud Laursens bought Aafarten, the name was changed to Åfarten. In the purchased he also got the motorboat “Benedikt”, 12 rowing boats, and an ice cream stand. In the spring of 1974, Knud Laursen was ready to sail on the river again.

Things have to be maintained, and in 1995 Odense Kommune decided to renovate Aafarten’s square in Munke Mose and to build a new kiosk. This forced Aafarten’s sailings to shut down until 1996 where the square and the kiosk were finished.

However, it would soon be time for a generational shift – quite literally. In 2009, Knud Laursen’s daughter, Trine Laursen, and son in-law, Morten Skytte, took over Odense Aafarten. They continued to offer new events and lovely tours for the citizens of Odense and tourists.

In 2014, Odense Aafarts kiosk moved from the cube shaped stall to facilities in the newly built Filosoffen which also houses a café and an art gallery. The rent of these facilities made it possible for Aafarten to optimise the ticket sale, the rent of boats, and to improve the overall consumer experience. The movement to Filosoffen removed Aafarten’s detached stall, and the cube shaped kiosk were torn down that year.

It did not take long before Aafarten again needed a shift in management. However, this was not a radical change. In 2017, Morten Skytte takes over the position as Odense Aafart’s CEO

In 2020, Morten Skytte chooses to withdraw as CEO at Odense Aafart. Instead, he hires Eva Pasgaard as Odense Aafart’s new CEO. Morten believes that Eva has the potential to bring a new drive, new ideas and great experiences that can be used to provide the citizens of Odense and tourists with several new and exciting experiences with Odense Aafart.

In the spring of 2020, Odense Aafart, as well as the rest of the country, was hit by Covid-19 lockdowns, and the season on the boast began two months later and usual. But challenges can also be seen as new opportunities! A long list of initiatives started such as support posters, pedal boats events, treasure hunting for kids and community singing in a garden at Langelinje. As a result, Aafarten managed to get through a challenging year. Later that year, Aafarten was being acknowledge for its empowerment and its creativity by being elected as “The Year’s Corona Fighter” in Best of Odense.

Aafarten is still active and energetic in finding new concepts and product to all costumers. In 2021, Mystery Tour was introduced. Here, companies, families, or groups of friends gets the opportunity to solve mysteries and riddles together. Mystery Tour is an exhilarating hunt for the truth consisting of the best from teambuilding, Escape Rooms, and riddle hunting. All of this is combined with an idyllic boat trip at Odense Å.